The Meteorological Authority announced details of the weather condition tomorrow, Tuesday, as cold weather prevails in the early morning, with moderate heat during the day, over Greater Cairo, Lower Egypt, the northern coasts, and northern Upper Egypt.

And the Meteorological Authority confirmed that the weather is warm in South Sinai and southern Upper Egypt, cold at night in the north of the country, even Greater Cairo, very cold in the south.

And the authority continued: “There is a water cloud in Cairo, Lower Egypt, the northern coasts, and northern Upper Egypt, which may be dense sometimes in the early morning.

The temperatures were as follows: 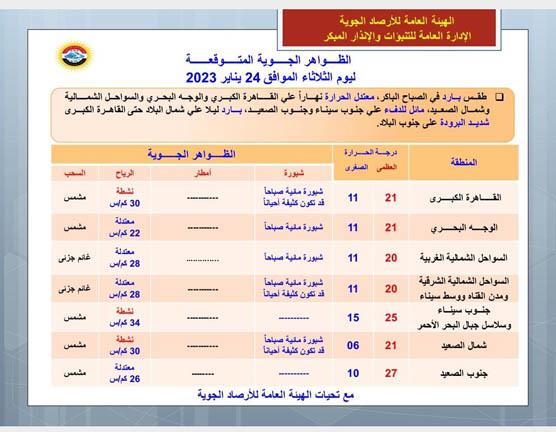 Allegedly, the student was beaten up by the Chhatra League for camping in DU

Ambulance workers strike in Britain due to poor salaries

This story is not true

Agriculture: We are working to benefit from scientific research for all Egyptian researchers

By name and seat number.. The result of the preparatory certificate in the Red Sea

Ambulance workers strike in Britain due to poor salaries

Campaign to stop illegal construction in Maasara and Helwan

All day news in the evening