ISIS announces the death of its leader

The Swedish Academy has announced that this year’s Nobel Prize in Chemistry will be awarded to the American scientists Carolyn Bertossi and Barry Sharpless and the Dane Morten Meldahl “for the development of click chemistry and bioorthogonal chemistry”.

BREAKING NEWS:
The Royal Swedish Academy of Sciences has decided to award the 2022 #NobelPrize in Chemistry to Carolyn R. Bertozzi, Morten Meldal and K. Barry Sharpless “for the development of click chemistry and bioorthogonal chemistry.” pic.twitter.com/5tu6aOedy4

81-year-old American scientist Barry Sharpless enjoys the rare privilege of is honored for the second time with the Nobel Prize in Chemistrywhich makes him the fifth person in the world to be honored twice with the coveted prize. In 2002 he was honored for his discoveries on the asymmetric catalysis technique.

The American scientist, who is based in California, and 58-year-old Dane Morten Meldahl, of the University of Copenhagen, are being honored for their pioneering work in the field of “click chemistry”, a new form of combining molecules. This is mainly used in the development of pharmaceutical treatments, for DNA mapping or the creation of new materials.

55-year-old American Carolyn Bertosi is being honored for the discovery of bioorthogonal chemistry, a chemical reaction described as capable of being initiated in a living organism, but without disrupting or changing its chemical composition.

The discovery of Bertossi, who was among the favorites for this year’s Nobel Prize in Chemistry, mainly opens avenues to improve the effectiveness of anticancer treatments.

“I was surprised. I was sitting there and it was hard to breathe,” said Bertossi, describing the moment she got the call to tell her she had won the Nobel.

The American scientist is eighth wife who is honored with the Nobel Prize in Chemistry, after the French Emmanuelle Charpentier last year and the American Jennifer Doudna, in 2020.

The Chemistry Nobel is the third in a row to be announced this week after those for Medicine and Physics.

Last year had been awarded to the German scientist Benjamin List and the American of Scottish origin David Macmillan for the development of a of a new molecular synthesis tool which allowed chemistry to “green” and pharmaceutical research to improve.

“This year’s Chemistry prize is about things that are not overly complicated, rather they use what is easy and simple,” said Johan Akvist, one of the members of the committee that awards the Nobel Chemistry Prize.

Modern chemistry seeks to create molecules which are increasingly complex, but also more expensive and time-consuming to invent.

With click chemistry and bioorthogonal “efficient molecules can be created following an obvious path”, also noted the Swedish scientist of the Nobel committee. 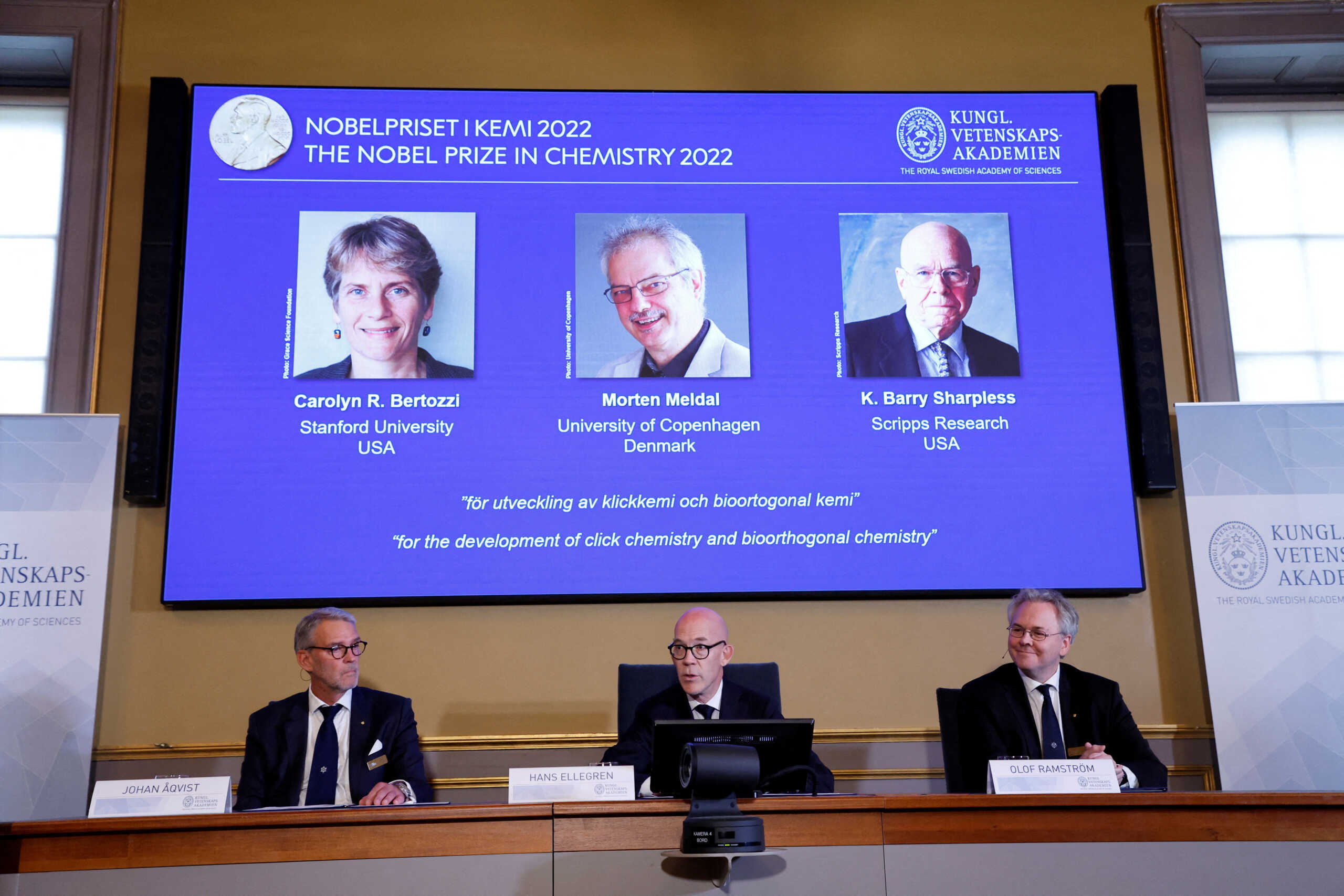 “She was big surprise for me, then my legs were almost shaking,” Morten Meldal, the Danish scientist who was also awarded the Nobel Chemistry Prize today, told Swedish public radio station SR.

“I am very happy to share this award with these two because they have really achieved great things in this field,” he noted, referring to Bertossi and Sharpless.

With the “new molecule architectures”, their discoveries enable advances “in materials science, surface science, chemistry in general and the pharmaceutical industry”, again according to the scientist of the Nobel Committee for Chemistry.

The prize is awarded by the Royal Swedish Academy of Sciences and is accompanied by prize money of 10 million Swedish kroner (approximately 920,000 euros).

Tomorrow (06.10.2022) the announcement of the Nobel Prize for Literature is expected and on Friday the Nobel Peace Prize, this one from Oslo, while on Monday the last of this year’s series of highly anticipated prizes, the Nobel Economics Prize, will be announced.

The Public Prosecutor at the Economic and Financial Criminal Division of the Court of Sidi M'hamed (Algiers) on Wednesday requested...

ISIS announces the death of its leader

Today, Wednesday, the spokesman for the "Islamic State" announced the death of its leader, Abu al-Hasan al-Hashimi al-Qurashi, without specifying...

Today, Wednesday, the Tunisian national team was eliminated from the first round of the 2022 World Cup, despite its historic...