Elections in Italy: Polls open – Concern in the EU over the possibility of a far-right government

Europe is watching the elections in Italy with great interest and concern, with the polls opening today at 8am Greek time and closing at midnight.

Mahabubur is a friend of the disabled

50,869,304 Italians are invited to the polls to renew the composition of the country’s parliament. 51.74% of citizens with the right to vote are women, and the remaining 48.26% men, while 4,741,790 are expatriate Italians. In total, throughout the Italian territory, there are 61,566 polling stations, the vast majority of which are housed in school complexes.

There are two main alliances of parties participating in the election: the conservative front (with the Brothers of Italy, the League and Forza Italia) and the progressive (Democratic Party, More Europe, the Alliance of Environmentalists and the Italian Left and Citizen’s Choice).

At the same time, the Five Star Movement is taking part in the Italian elections as an independent force, while the support of the voters is also sought by the parties Zodani Italia and Drasi, which recently created the so-called “Center Pole”.

The electoral law by which today’s contest is held was implemented for the first time in 2018 and is based on two-thirds simple proportionality and one-third majority.

Once the polls close, Italy’s biggest media outlets are set to run a series of Exit Polls, with vote counting expected to conclude on Monday morning.

According to meteorological forecasts, heavy rains are expected in at least one third of the country during almost the entire day. Which, according to several analysts, could contribute to the reduction of the participation rate of citizens in the electoral process. 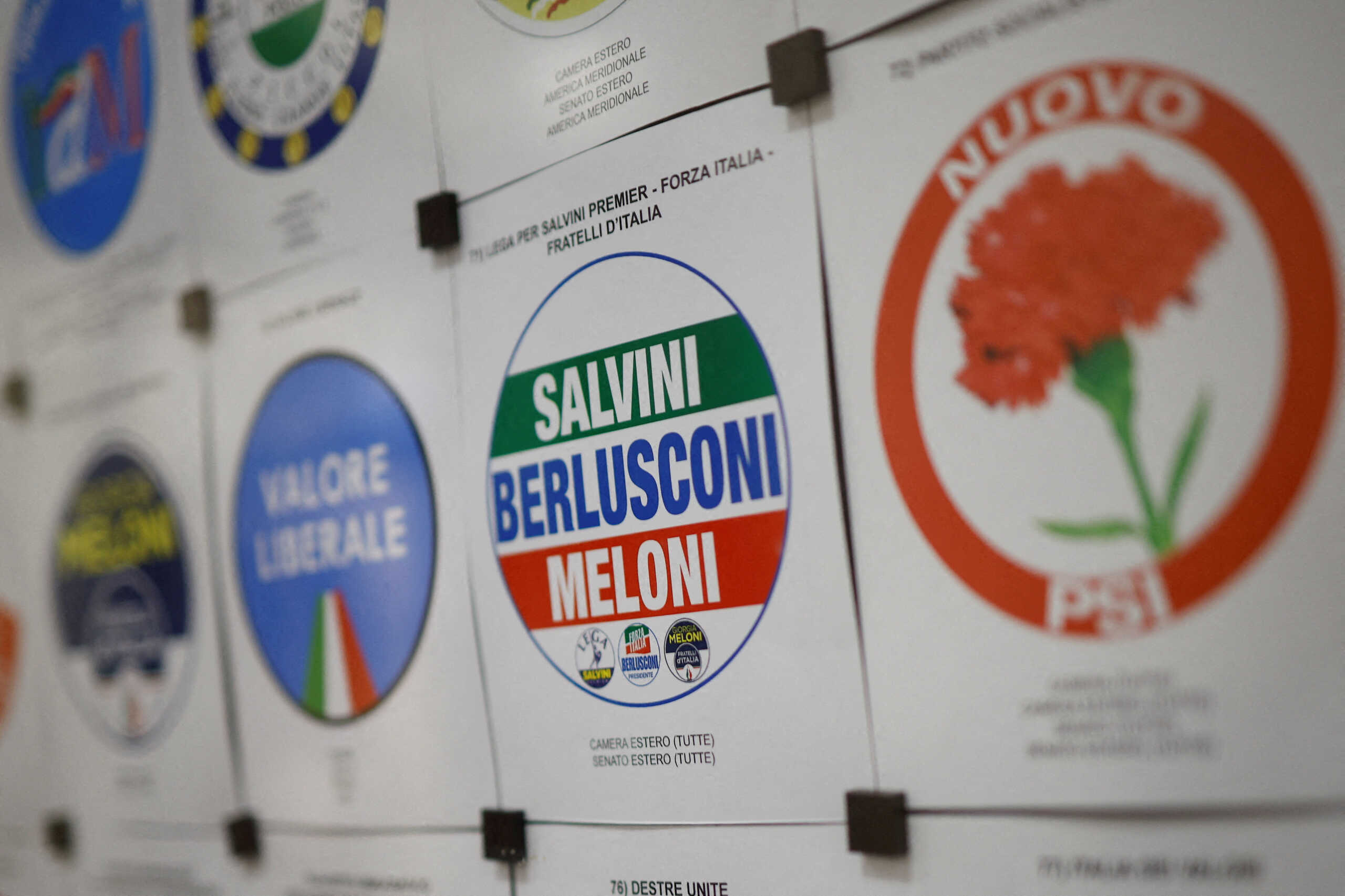 The EU is watching with bated breath

Confusion and concern about the prospect of a far-right governing coalition taking power in Italy prevails in Brussels.

If the polls are confirmed, for the first time in Italy – the EU’s third-largest economy and a founding member – the most far-right government in its post-war history will take power.

This coalition sends contradictory messages, which worry the EU and NATO. On the one hand, Georgia Meloni presents herself as pro-Atlantic, while on the other hand Salvini and Berlusconi present themselves as quite tolerant of Russian President Vladimir Putin.

When it comes to the rule of law, fundamental freedoms, LGBTI rights, gender equality, or even immigration, Rome will undoubtedly find itself closer to the positions of Hungary or Poland, judging by Meloni’s pre-election statements.

The question for Brussels is whether it will be possible to develop constructive cooperation with such a government or whether tensions will manifest themselves on critical issues, such as the war in Ukraine, sanctions against Russia, energy, the economy, immigration, individual rights and freedoms.

Among other things, Brussels is concerned that Giorgia Meloni has already announced that she wants to renegotiate some of the terms that come with Italy’s €191.5 billion recovery plan — the largest amount given to any member state. EU from the Recovery Fund (NextGenerationEU).

But the room for negotiation is narrow and no one in the European institutions would like to see the reforms implemented by the outgoing Italian Prime Minister Mario Draghi freeze.

After all, with a debt of more than 150% of its GDP, Italy has no room for maneuver.

Ursula von der Leyen sent a firm, if somewhat inelegant, message from Princeton University: “We will work with any democratic government that wants to work with us,” but “if things go wrong, we have the tools” to respond, said the president of the European Commission.

The head of the Commission brought as an example Poland and Hungary, two countries that were “punished” by freezing funds from the Recovery Fund.

As is always the case, and this time Brussels will be waiting for the first samples of writing of the next Italian government.

“We will see the result of the elections,” said the president of the Commission.

The rather unexpected intervention of von der Leyen, who since the beginning of her term had never been so clearly expressed before an election, if nothing else attests to how intense a reflection prevails at the highest levels of the European institutions and the will of Brussels to send a clear message in each direction.

The article Elections in Italy: The polls are open – Concern in the EU about the possibility of a far-right government was published in Fourals.com.

Mahabubur is a friend of the disabled

In particular, public awareness activities on the education of disabled children are being conducted regularly. Sewing training and more than...

Adidas, the manufacturer of the official ball for the 2022 World Cup, settled the great controversy over Portugal's first goal...

Many people use Bluetooth wirelessly while listening to music or watching videos. Some talk by connecting Bluetooth headphones to the...

Coronavirus – Britain: Over a million cases in a week

The coronavirus is on the rise in Britain as more than one million cases have occurred within a week. The...