In the barrage of soulslike games out there these days, it really takes attention and effort to single out those titles that have something truly different to offer. Lost Epic, from the Japanese Team Earth Wars, adopts all those positive elements of the genre it copies, along with a multitude of options and customizations trying to satisfy even the most demanding player. Let’s see if and to what extent the above are harmoniously combined.

Lost Epic takes you to an unknown world oppressed by six diabolical deities who rule by sowing destruction. You, in cooperation with a faction of witches, must travel to six different regions and put an end to their tyranny, giving the world a second chance to rise from its ashes. Allies in your mission you have the witches who help you on your journey in various ways, your weapons and the skills you acquire along the way.

Lost Epic is a 2D action-RPG with the familiar soulslike system and a lot of exploration. I have to admit that the above features go hand in hand with the epic fantasy style that the game adopts, along with an ideal atmosphere that is enjoyable and at the same time fits the spirit of constant battles. Once you’ve chosen the look you want your character to have (from a fairly limited range of options), a simple walkthrough of the game’s moves and modes begins, focusing on the basics. However, due to the structure of the title consisting of many menus with a multitude of options and the possibility of learning abilities that reach 20 pages (!) patience and perseverance are needed to fully “study” all its functions and mechanisms. The initial “suffocation” from the complexity of the title gives way to a gradual understanding of the details and planning you have to do to survive, ultimately offering a feeling of satisfaction. 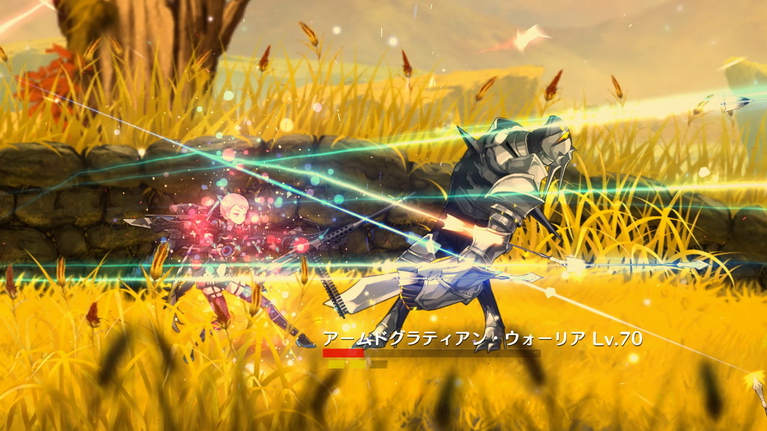 Your protagonist is able to freely travel between worlds and explore the map, killing enemies and discovering secrets along the way. There are checkpoints where you can save, level up your character, upgrade your equipment or even make new ones from materials you find on your way. Checkpoints are also your reset point if you die (which you will many times). Unfortunately they appear less often than they should, which leads to frustration as you lose all the anima (in-game money, more below) you’ve collected up to that point. Also the game is a bit unfair in terms of the scale of difficulty and appearance of enemies. So for example you may be progressing with relative ease on the map killing enemies when suddenly without warning a huge enemy appears and locks you in the area with no way to escape, which leads to almost certain death. The map is pretty simple and straightforward but the areas are long and tiresome especially if you die and have to start over.

Anima is required to level up, learn new abilities and craft equipment. Anima is the reward you earn by killing enemies and there is even a reward process depending on your final performance (eg if the enemy didn’t damage you). Be prepared for the amount of time you’ll spend purely on anima acquisition, as any act of upgrading or crafting gear requires large amounts of it, meaning quite a few routine battles. At least you have the option to destroy materials and equipment you don’t need (and you find plenty of) in exchange for anima, so with constant exploration you have an extra source of money. 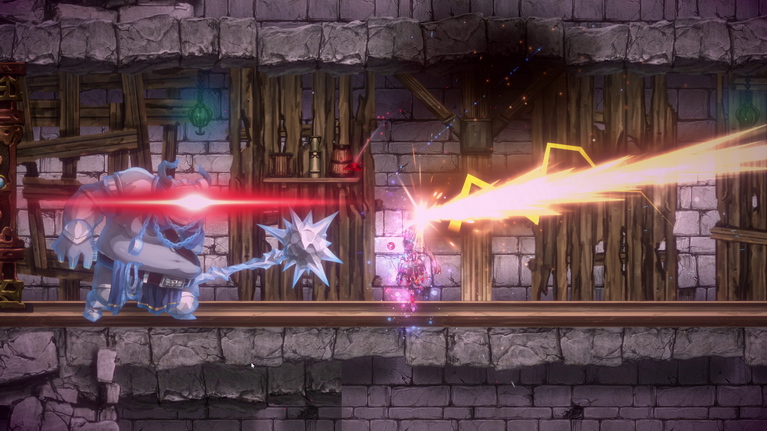 The battles are satisfying and varied, but not without problems. You can attack with light or heavy attack, or avoid enemies with escape. Every move you make uses up stamina, leaving you vulnerable to attacks if you overdo it with constant button presses. A very nice feature is that many weapons have their own repertoire of moves that completely change the set of attacks you have at your disposal, as well as extra abilities such as poisoning enemies. As you hit the enemy you fill up a bar that when it’s full you unleash a deadly (and impressive) blow. In addition to basic attacks, you have at your disposal an attack parry with a direct counter attack, and the divine skill, an all-powerful attack that varies from weapon to weapon and can be unleashed to immobilize opponents and deal massive damage. With a little practice you can pull off nice combos with light fast attacks and dive skills that are built for maximum effectiveness per enemy type (eg flying enemies).

However, often the attacks do not find their target or the avoidance does not work as it should, as if the game does not have a proper understanding of the i-frames that it sets as basic functions. Finally let’s say that the weapons have quite a wide variety and consist of small swords, huge swords that need two hands and bows for fighting from a distance. Unfortunately the same is not true of the enemies, who are mostly identical models just with different coloring and extra powers or abilities.

In the game you have quite a few things to do. Aside from the main quest of slaughtering the six gods, there are several sub-quests that mostly involve killing a certain number of monsters in each area or escorting a character around the map. There are also specific missions where you have to kill elite enemies (like summons), which reward you with equipment and anima, while also unlocking new abilities to take advantage of. If you are having a hard time you can reduce the difficulty of the game with the impact of course getting less anima. You can also play co-op, through which up to three players can work together to overcome difficult situations and strong opponents. 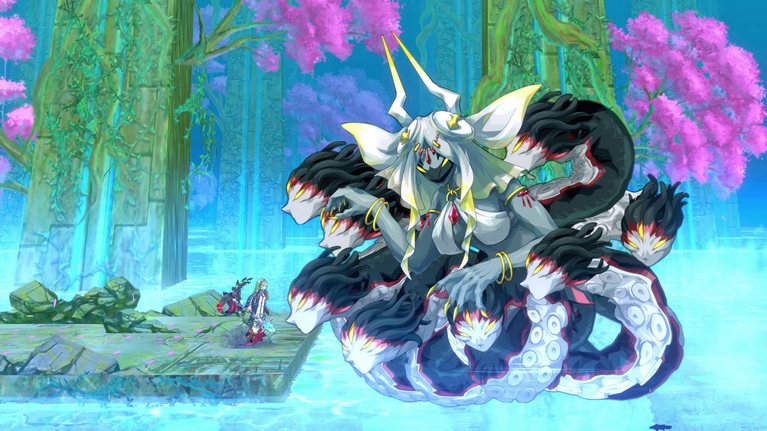 The graphics are impressive with their clean anime style and beautiful environments, but they quickly tire because they tend to be repetitive. Each area you visit has its own beautiful theme, be it castles, or forests with caves and underwater labyrinths. But there’s a lack of variety between each area’s tracks, which, combined with the constant death setbacks, often makes you feel like you’re seeing the same things over and over again. The soundtrack, without impressing, consists of nice pieces that accompany the exploration and combat, I just would have preferred something less rhythmic and more epic. Unfortunately the sound effects are disappointing and the pulse of the battle is not enhanced as much as it should be with proper metallic booms except in a few cases of certain weapons. Also some voices are probably so funny on purpose.

Lost Epic is a fun action-RPG adventure, although it often falls into pitfalls that could very easily have been avoided. With a satisfying duration that exceeds 10 hours, a continuous flow of battles and dozens of customization and upgrade options, it allows you to easily overlook its themes. If you like soulslike games, Lost Epic deserves your attention.

Marcin Iwiński leaves the position of CEO of CD Projekt, remaining at the studio – Fourals.com

Marcin Iwiński leaves the position of CEO of CD Projekt, remaining at the studio – Fourals.com

The co-founder of the Polish CD Projekt, Marcin Iwiński, announced his departure from the CEO position he shares with Adam...

Tipster Snoopy posted on his Twitter account the official promo video of Google's first and upcoming smartwatch, Pixel Watch.According to...

Tipster Snoopy posted on his Twitter account the official promo video of Google's first and upcoming smartwatch, Pixel Watch.According to...