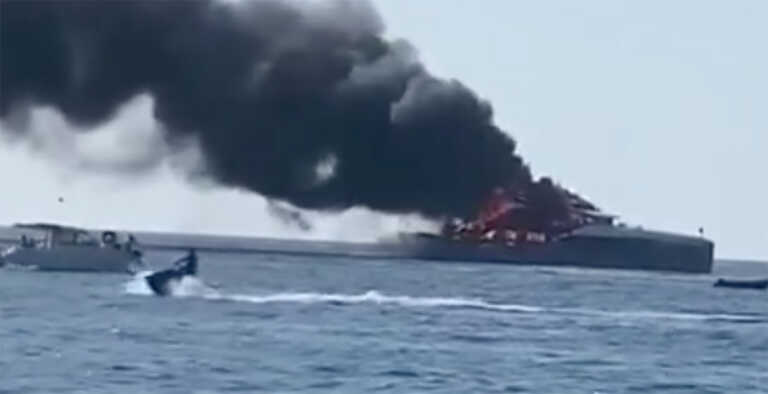 A £20 million luxury yacht owned by an Italian businessman has gone up in flames near the Spanish island of Formentera. The videos that have been released show the flames and black smoke “disappearing” little by little the expensive yacht.

The 150-foot super-luxury Aria SF caught fire Thursday afternoon off Cala Saona, on the west coast of Formentera island in Spain, just a month after it was delivered to its owner, Paolo Scudieri.

Nine passengers and seven crew members were on board when the fire broke out and all were rescued safely by two Spanish coastguard vessels.

The superyacht that caught fire, which had a swimming pool, five bedrooms and a gym, was due to make its official debut at this year’s Cannes Yachting Festival and an investigation into the cause of the fire has been launched.

The yacht’s 62-year-old owner, Paolo Scudieri, is the chairman of interior car parts maker Gruppo Addler, which was founded by his father in 1956, and is said to be worth nearly €500 million.

Paolo Scudieri’s 45 meter long Aria SF yacht is on fire in Formentera. It is a luxury boat valued at more than €20 million and launched this year.https://t.co/tXrLbUOvhP pic.twitter.com/NnItNn4yjQ

A spokesman for the Spanish coast guard, speaking after the fire was extinguished late on Thursday, confirmed: “Seven crew members and nine passengers are all safe. They were taken to a police boat. The fire is almost out.

“Two coastguard vessels, the Salvamar Acrux and the Guardamar Concepcion Arenal, were mobilized from our coordination center in Palma, Majorca, after an alarm was raised at around 5pm. yesterday/Thursday’.

Jamal Amro, a researcher specializing in Jerusalem and Al-Aqsa Mosque affairs, said in an interview with the Palestinian Information Center...

I am getting two hands because I will dreamThe girls took part in the reception given by the Union Parishad....