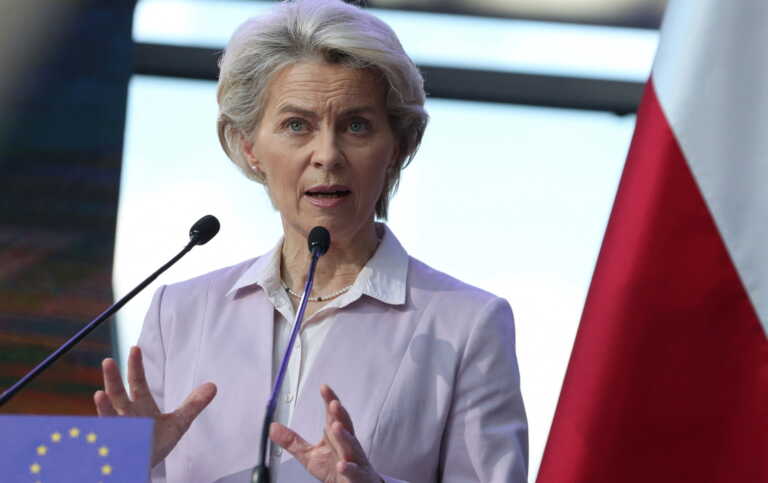 Ursula von der Leyen faced a threat of a motion of censure in the European Parliament. Three members of the Liberal European Renewal Group are calling for a vote against the president of the European Commission.

The text of the motion of censure against Ursula von der Leyen bears the signatures of the Dutch Sophie in Veld, the former Prime Minister of Belgium, Guy Verheugenstadt, and the Spanish MEP, Luis Garricano, vice-president of the group.

In particular, they are calling for a vote of censure against the President of the European Commission, criticizing her for giving the green light to the Polish reconstruction plan despite the violations of the rule of law by Warsaw.

In order for the text of the motion of censure to be put to the vote, it will have to collect the signatures of one tenth of the MEPs (ie 70 signatures).

“If Ursula von der Leyen, the president of the Commission, ‘continues to refuse to seriously apply the rule of law to the rule of law, we will withdraw our support for her,'” said Guy Verhofstadt.

The Commission on Wednesday (02.06.2022) gave the green light to the Polish reconstruction plan of 35.4 billion euros, which has been frozen for more than a year due to violations of the rule of law, mainly in terms of the independence of the judiciary, Warsaw.

The three MEPs consider Warsaw’s announcements about the removal of a judge and the vote in the Polish parliament to abolish the disciplinary body, which was to oversee judges and was established in the context of a broad reform of the judicial power. The green light of the Commission was based on these announcements.

The conditions requested by the Commission are reduced in relation to the requirements of the Court of Justice of the European Union and do not respond to the refusal of the Polish authorities to recognize the supremacy of European law over national law, while Warsaw “shows no intention (… ) to fully restore the independence of the judiciary, says Sophie in Veld, accusing Ursula von der Layen of “creating a huge political problem”.

During the vote in the Commission, two of its key executives, the Danish Margaret Vestager (Renew Europe) and the Dutchman Frans Timmermans (Social Democrats), both executive vice-presidents, opposed the ratification of the Polish reconstruction plan.

“The Commission is aware that the solutions announced by the Polish authorities are purely decorative,” Guy Verhofstadt wrote in a letter to his political group.

For a motion of censure to be approved by the European Parliament, it must secure two-thirds of the votes of the MEPs present.

Officials and representatives of the political groups did not comment on the motion of censure in view of the group meetings in Strasbourg in the afternoon.

The article Ursula von der Leyen: Liberal MEPs threaten with a motion of censure – How many votes are needed was published in Fourals.com.