Philippines: Seven killed by ferry fire – They fell into the sea to be saved 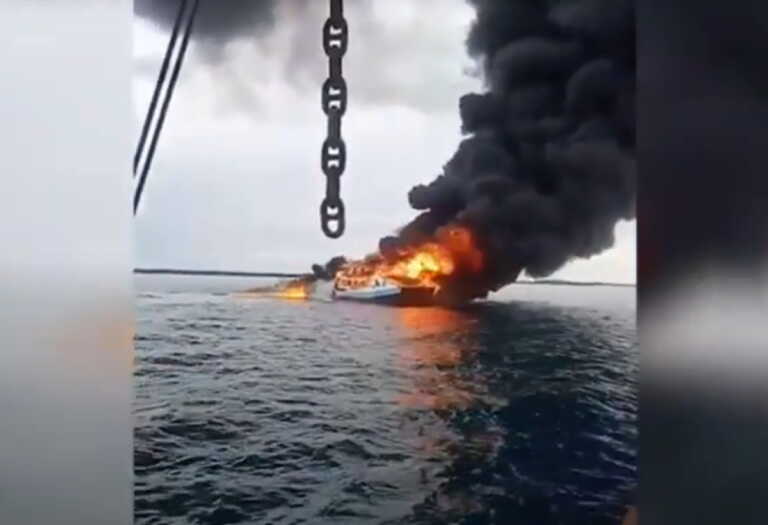 A fire broke out on a ferry in the Philippines shortly before it reached its destination, killing seven people, five women and two men, while at least seven others are missing.

At the same time, 120 people were rescued from the fire on the ferry in the Philippines. The fire broke out on a ferry with 134 passengers, 124 passengers and 10 crew members, just a few kilometers before the boat arrived at its destination in the Philippines, causing many people to fall into the sea.

The fire broke out on Mercraft 2 as it was en route from Poligio Island to the port city of Real, in the province of Quezon, on the island of Luzon, about 60 km east of the capital, according to a Coast Guard spokesman and eyewitnesses.

According to the Coast Guard spokesman Armando Balillo, seven people were confirmed dead, 120 were rescued, and investigations are continuing to locate the seven missing.

The ferry departed from Poligio at 05:00 (local time; midnight Greek time) and sounded the alarm one and a half hours later.

A ferry carrying over 130 people caught fire Monday in the Philippines killing at least seven people while most passengers and crew members were rescued, the coast guard said. https://t.co/571VqjZUmj

Dense black smoke rose from the two-story boat as flames engulfed it, according to images released by the Coast Guard.

Many passengers, on lifeboats or wearing life jackets, fell into the sea. Dozens were collected from passing ships.

“We were able to rescue 40 people. “We recorded two deaths,” said Capt. Brunette Asagra, whose boat was just 500 meters from Mercraft 2 when the fire broke out at a local radio station.

“They were lucky, because we had also left Polygio. “They had just overtaken us, but we were still close,” Asagra explained.

At least 21 people have been hospitalized, said Ricky Pomblete, a disaster relief official in Real.

“The boat is still very far from the port, about seven kilometers,” he said.

The causes of the fire are not yet known. But in the Philippines, an archipelago of more than 7,600 islands, navigation safety regulations are often not followed, many boats are outdated and usually overloaded.

A roro vessel with 124 passengers bound to Real, Quezon caught fire on Monday morning. The Philippine Coast Guard says six of the onboard passengers were brought to the nearest hospital.

In 1987, the Philippines had the worst peacetime maritime accident in the world when an overloaded ferry Dona Paz collided with an oil tanker off Mindoro, south of Manila. Report: around 5,000 dead.

The article Philippines: Seven killed by ferry fire – They fell into the sea to be saved was published in Fourals.com.