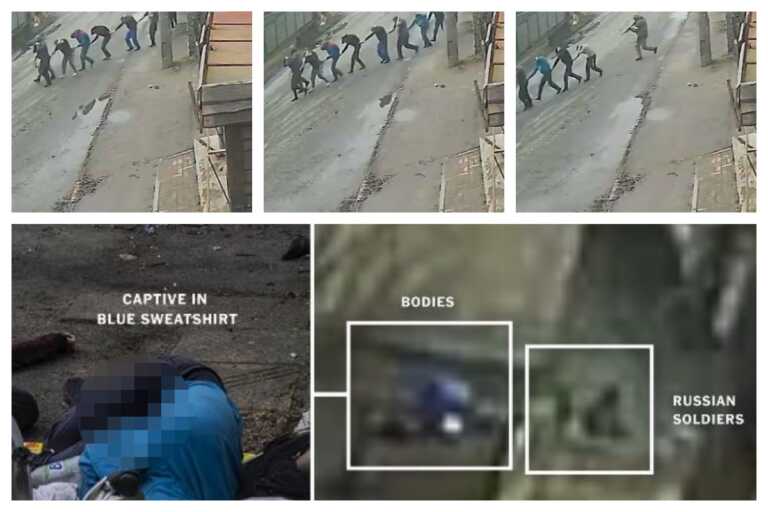 The war in Ukraine has been raging for almost three months and every day brings to light very harsh images. Characteristic of what is happening are the videos of the New York Times, which show Russian soldiers leading at least nine Ukrainians for execution and corpses in Butsa.

The videos, according to the New York Times, were taken on March 4 and journalists had to spend weeks in Bhutsa interviewing and researching to find out what happened to the men.

The first NYT video shows Russian soldiers leading at least nine Ukrainians – one of them wearing a distinctive light blue jacket – to be executed on March 4.

CCTV camera footage, obtained by The Times, showed Russian soldiers leading a group of Ukrainian captives toward the courtyard where they would be executed moments later on March 4.
https://t.co/nNktWDswAx pic.twitter.com/zBK24e9RUb

Another video from a drone – taken a day later, on March 5 – shows corpses lying on the ground near an office building at 144 Yablonskaya Street and two Russian soldiers standing guard next to them. In this video, a man in a similar light blue jacket can be seen again.

After weeks of investigations and interviews with witnesses, medical examiners, police and the military, NYT reporters were able to collect unpublished videos from the day of the execution and, searching social media for missing persons, identify all those executed.

According to NYT, these are: Anatoliy Prykhidko, Andriy Matviychuk, Andriy Verbovyi, Denys Rudenko, Andriy Dvornikov, Svyatoslav Turovskyi, Valera Kotenko, Vitaliy Karpenko. They were husbands and fathers, working in grocery stores and factories who lived a normal political life before the war broke out in Ukraine.

Most of those executed, according to the report, had joined various defense forces before their assassination. Almost all of them lived within walking distance of the yard where their bodies would later be found.

Finally, it is worth noting that the New York Times gives the details of the eight people who, according to their report, were executed by Russian soldiers and have managed to identify them, while the first video shows nine civilians.

A weekslong investigation by The New York Times Visual Investigations unit provides new evidence — including three videos obtained by The Times — that Russian paratroopers rounded up and executed a group of Ukrainian men. https://t.co/6iKcomv3RN

With information from the New York Times

The article War in Ukraine – Shocking Images in Bhutan: Russian Soldiers Lead Ukrainians to Execution was published in Fourals.com.