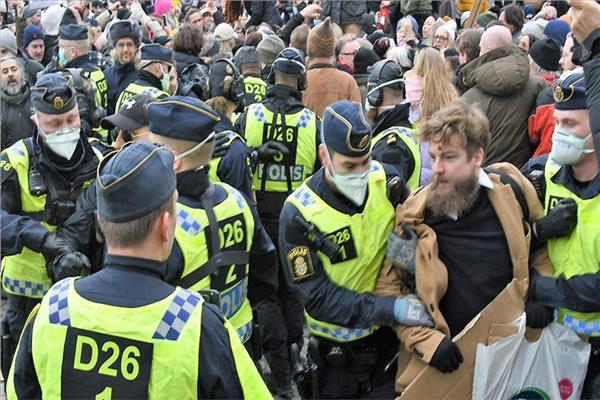 witnessed Sweden An angry demonstration by a number of young Muslims protesting against the police allowing an extremist politician to burn the Holy Quran.

The Swedish extremist politician Rasmus Paludan and his “Hardline Line” party, known for its anti-Islam provocations, announced the organization of a demonstration for his party, during which he said that he would burn the Holy Quran.

The extremist party’s event was planned to take place in the city of Linköping, specifically in the Skagittorp region, which is known to have a large Muslim community.

As soon as the event was announced, a number of members of the Muslim community gathered to demonstrate against the extremist and his party, which led to clashes with the police, resulting in 3 injuries.

The Muslim demonstrators succeeded in preventing the demonstration in the first place, and thus members of the extremist party were unable to implement the scheme to burn the Holy Qur’an.

While the Swedish politician appeared in another video, burning the Holy Quran in a street.

Far-right politician burns a copy of the Koran in Sweden and clashes with protesters denouncing the police allowing the Danish extremist known for his anti-Islam provocations to demonstrate
للمزيد👈https://t.co/BlaBngKej1 pic.twitter.com/U6kdN1U13l

Corsica: Three people were killed by the strong winds

All demands will be met in ‘Demand’ Bikash organizes Ramadan

Corsica: Three people were killed by the strong winds

According to the Taiwan Air Force, six F-16V fighters flew as part of patrol and training missions. Two fighter jets...

All demands will be met in 'Demand' Bikash organizes Ramadan