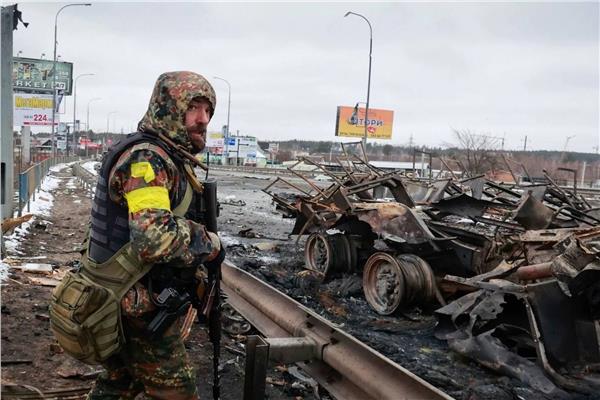 Media reports said that foreign fighters volunteered to fight with Ukrainian army in the face with RussiaThey began fleeing the country in the wake of Russia’s missile strike on a military assembly center in Yavoriv, ​​western Ukraine, which killed dozens of them.

The magazine “Military Watch”, which prepared a report on this matter, says that after the outbreak of the war between Russia and Ukraine on February 24, it was widely reported that there are thousands of citizens in Western countries volunteering to participate in the war on the side of Ukraine, the majority of whom are owners of Combat experience and military backgrounds.

The Russian media described these fighters as mercenaries, while the magazine asserts that the motive for their participation in the war appears ideological, and quoted a Swedish volunteer, Jesper Soder, who described the Russian missile strike as “absolute hell – fire, screaming, and panic” along with many Bombs and missiles,” stressing that he soon led Western fighters, including Scandinavians, British and Americans, out of Ukrainian territory across the Polish border.

The magazine quoted a retired US soldier, who survived the Russian missile strike on the “Yaforev base” and left the country, as saying, “I survived the missile strike because it was targeting the solid buildings at the base instead of the tents I was staying in,” adding that more than two-thirds of The Western volunteers decided to leave at once.

On the capabilities of the Western volunteers, the retired American stressed that “some of them were professional soldiers and were still able to fight, and others were drunk, in addition to the majority with very marginal military experience, in addition to individuals who should not have come at all.”

Other survivors advise any future volunteers who wish to participate, saying, “The situation is very difficult,” emphasizing, “You must go, by any means, to join the (international) Corps directly, but you should be fully aware of how difficult the conditions will be for Kyiv, And be aware that the Russians have planes and you’re going to join the opposite team that doesn’t. So be very receptive to the possibility of death.”

The magazine says that the most prominent of those who were said to have died among the foreign fighters days after entering Ukraine was the famous retired Canadian sniper known as “Wali” or “The Shepherd”, and he was a soldier working in the Canadian Cavalry in the 22nd Division, which participated in the NATO forces. Participation in the Afghanistan war.

He participated in the service in the Canadian army from 2009 to 2011, after which he volunteered in the ranks of the Kurdish militias that were fighting the “Islamic State” organization (ISIS), and “Wali” won the title of the best and most skilled NATO sniper, and some reports say He set records and was shooting 40 people a day.

The Russian Defense Ministry had issued warnings that “Western mercenaries” in Ukraine would not be treated as prisoners of war, and strongly advised them not to join the ongoing conflict.

The circumstances of the killing of the Canadian sniper “Wali” are still unknown, but his case reflects a broader phenomenon, as Western personnel with considerable military experience have worked in less intense and fire-intensive conflicts in Iraq and Afghanistan, while the situation in Ukraine appears to be very different, which Those with previous war experience make Western fighters ill-equipped to face this type of war field, as “Military Watch” confirms.

If these types of unknown bruises appear on your body, go to the doctor immediately

If these types of unknown bruises appear on your body, go to the doctor immediately