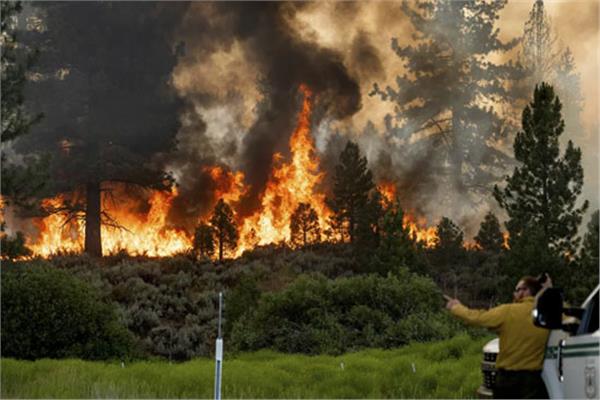 Scientists from the University of Colorado, USA, have discovered that an increase in wildfires is caused by higher nighttime temperatures.

And EurekAlert magazine notes that it became clear to University of Colorado scientists that the frequency of hot and dry nights due to climate changes led to an increase in the number of wildfires at night.

And she adds, the researchers analyzed the data they obtained from satellites on 81,000 fires, in order to calculate the vapor pressure deficiency index (VPD), which is the main factor causing fires. Because this indicator shows the difference between the theoretical pressure of vapor in saturated air (humidity of 100 percent) and the actual pressure of water vapor in air at the same temperature. When the shortage is large, the air absorbs a high percentage of soil and plant moisture, and when it is small, the air becomes moist and cool.

And when fighting fires, experts take into account the value of the night VPD index, because its high value helps in ignition. Researchers have discovered that due to climate changes during the years 1979-2020, the number of dangerous nights increased by 11 additional nights in the western United States, meaning that the percentage of increase in the number of dangerous nights is equal to 45 percent. Knowing that 40 years ago, the nights were more humid, which facilitated the work of firefighting teams, because hot nights were rare.

The researchers also discovered that, worldwide, the number of night fires increased by 7.2% during the years 2003-2020. In the western United States, it increased by 28 percent.

Of course, those most affected by these fires are evergreen and broad-leaved forest trees, shrubs and green meadows. The rate of temperature rise at night caused by climate changes is higher than during the day, which increases the risk of fires at night.

New Zealand is at the mercy of severe bad weather. At least 200 homes were evacuated after torrential rains and...