7 years in Sisi’s rule.. The “You don’t care” initiative to encourage local products 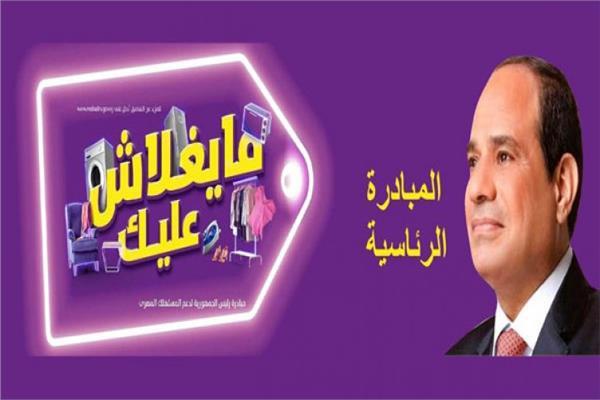 The book “Vision and Achievement.. Egypt Takes Off”, prepared by the Council of Ministers, documented the presidential initiatives that were launched during the past seven years, noting that they constituted a distinguishing and shining point within society in light of the political leadership’s keenness to bring about qualitative changes, and to build the Egyptian person health, socially and educationally. In addition to localizing the concept of social justice.

The political leadership sought to adopt an integrated protection policy aimed at removing the burden from citizens and providing support to all groups within society, improving the quality of life and investing in human capital in order to achieve sustainable development in its comprehensive concept, believing that social, political and economic development cannot be reached without bringing about development Real human beings in various axes and directions.

And he touched on the presidential initiative to stimulate consumption and encourage local product (what is wrong with you), which was launched in July 2020, with the aim of encouraging increased local production, operating production lines with maximum capacity and increasing job opportunities, as about 13 billion pounds were pumped to support citizens by 200 pounds per capita with the ration card. A maximum of 1000 EGP per card.

The mechanism of the initiative’s work depends on the commitment of manufacturers, commercial chains and distribution points participating in the initiative to reduce the selling price of the commodity by granting a discount rate to all citizens wishing to purchase, as the objectives of the initiative are to move the wheel of the economy for the benefit of citizens of all segments.

The Minister of Finance, Mohamed Maait, affirmed the political leadership’s keenness to provide goods to citizens at reduced prices. alleviating the burdens on their shoulders, especially those with low incomes; This contributes to limiting the repercussions of the emerging corona virus, and this is clearly evident in the presidential initiative to stimulate consumption and encourage local product, which is launched under the slogan “What is wrong with you”, as discounts reach 20% in addition to subsidizing each individual with ration cards with a maximum amount of 200 pounds 1,000 pounds for the card, at a total cost of 13 billion pounds, to be borne by the state’s public treasury; To contribute to the support of low-income people.

The minister added that there is a presidential mandate to effectively contribute to moving the wheel of the economy for the benefit of citizens of all segments: manufacturers, traders and consumers; In a manner that encourages factories to operate at their full production capacity, enhances industry capabilities, stimulates local production, revitalizes internal trade, and meets citizens’ needs at reasonable prices, in a manner that helps raise economic growth rates, preserve employment, and create new job opportunities.

He said that the presidential initiative to stimulate consumption and encourage local product, which includes household and electronic appliances, ready-made clothes, leather products, furniture, home finishing products, and handicraft industries, allows electronic purchase via the website and allows installment sales by providing financing for goods at reduced interest rates in cooperation with Some Egyptian banks and consumer finance companies.

Meanwhile, Assistant Minister of Finance, Mohamed Abdel-Fattah, said that the details of launching the president’s initiative to encourage local production and stimulate consumption, explaining that it includes the participation of 4,200 commodities, 1,200 merchants, and 44 factories.

President Abdel Fattah El-Sisi had signed the first copy of a book documenting all the achievements made in all parts of Egypt, and including all development projects during the past seven years, during the inauguration of the gasoline production complex at the Assiut Petroleum Refining Company in Assiut Governorate, in addition to a number of other development projects Within the region of Upper Egypt.

Also read | “Vision and Achievement.. Egypt Takes Off” .. A book that documents the advancement of the state in all sectors during 7 years

A new paper in front of Future… Who is Nabil Kouka, Maaloul’s alternative?