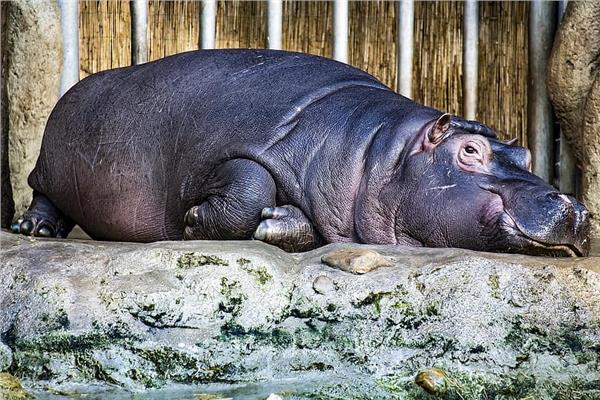 announced Belgian zoo Two hippos under her care have been placed in isolation, after they tested positive for corona in an incident that may be the first of its kind for such animals.

The Belgian National Veterinary Laboratory confirmed that two hippopotamuses at the Antwerp Zoo – 14-year-old Imani and 41-year-old Hermine – were infected with Covid-19.

It is unclear how they contracted the disease, and both are in good health, apart from an exceptionally runny nose. Keepers tightened virus control restrictions across the zoo.

Read also, there is no connection between the infection of the Belgian citizen with the Omicron mutator with “Egypt”

“To my knowledge, this is the first recorded outbreak among these breeds. Worldwide, this virus has been seen mostly in great apes and cats,” said Francis Verkamen, a veterinarian at the Antwerp Zoo.

All zoo animals were tested for COVID-19 last year, and no cases of infection were detected.

Hippopotamuses’ noses are usually wet, but Verkamen said he decided to test the thick liquid coming out as a precaution, and was surprised by the result.

The park’s hippo pen has been closed to visitors and is set to reopen only when the hippo test results are negative.

All zoo workers have tested positive for the virus, and they must wear masks and other precautionary measures before handling hippopotamuses.

The Corona virus appeared for the first time in the world at the end of December 2019 in the city of Wuhan in the Chinese province of Hubei, and caused more than half of the world’s population to enter health isolation in order to confront the first wave of the virus.

The World Health Organization is still calling on countries to implement social distancing measures in addition to health measures represented in wearing masks.

Al-Masry: The absence of the fans will affect us against Nigeria’s Rivers United

Al-Masry: The absence of the fans will affect us against Nigeria's Rivers United