The United Nations Support Mission in Libya has warned against actions that could deprive Libyans of exercising their democratic right, or that might undermine the holding of free, fair, inclusive, transparent and credible elections.

The UN mission stated, in a statement, that it is following with great concern the continued closure of the Court of Appeal in Sabha, in addition to the reported threats against the judiciary.

According to media reports, an armed group allegedly affiliated with the forces controlling Sebha has again obstructed the work of the court in Sebha, and indicate that judges were prevented from appearing in person to perform their legal duties, directly impeding the electoral process.

The UN mission expressed its deep alarm at the increasing reports of intimidation and threats against judges and staff in the judiciary, especially those who deal with complaints related to elections, and against candidates in a number of regions in Libya.

It strongly condemned all actions that undermine the integrity of the electoral process and prevent Libyans from exercising their democratic rights in safety and dignity.

In its statement, the mission indicated that it reminds all parties involved in obstructing the justice system that they are subject to criminal responsibility under Libyan law, and may be subject to sanctions in accordance with relevant UN Security Council resolutions. 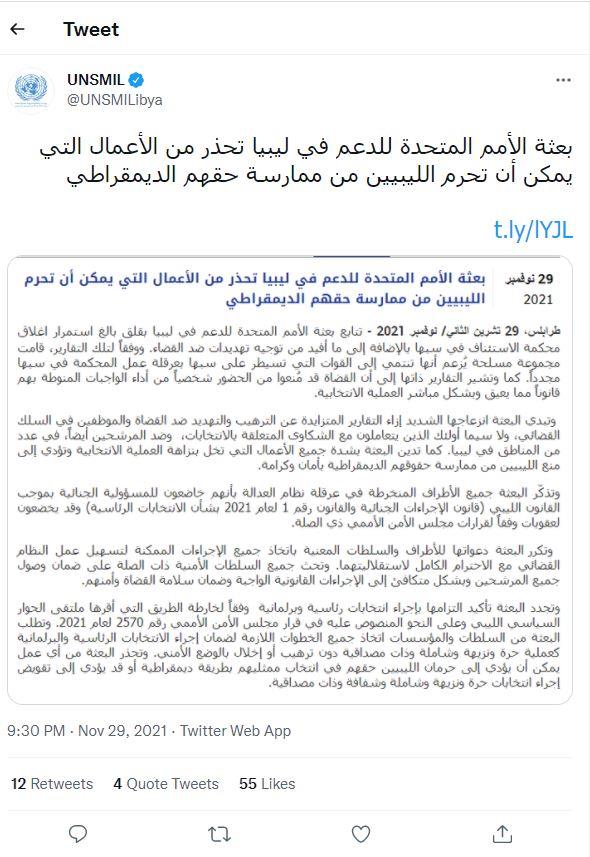 The mission reiterated its calls to the concerned parties and authorities to take all possible measures to facilitate the work of the judicial system, while fully respecting their independence.

It urged all relevant security authorities to ensure that all candidates have equal access to due process and to ensure the safety and security of judges.

The mission reiterated its commitment to holding presidential and parliamentary elections in accordance with the road map approved by the Libyan Political Dialogue Forum, and called on the authorities and institutions to take all necessary steps to ensure that the presidential and parliamentary elections are held as a free, fair, inclusive and credible process without intimidation or prejudice to the security situation.

Coronavirus – Omicron mutation: Third dose of vaccine three months after the second for all adults

Every day is a dress.. all the looks of the fourth day of the Cairo Film Festival

Sakhawat Hossain is a leading figure in the hospitality and tourism industry in Bangladesh, having held several key executive roles...

Dr. member of the research team. John M. Pageteau told 'US Sun', after the mice, the research was also done...

Gunmen stormed a hospital in a suburb of the Haitian capital, Port-au-Prince, took a patient out and killed him, the...

Every day is a dress.. all the looks of the fourth day of the Cairo Film Festival