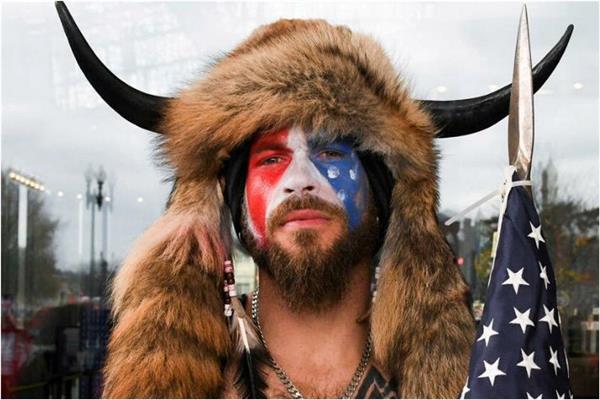 The Federal Prosecutor in the United States has requested a 51-month prison sentence for Jacob Chansley, the “man with the two horns” whose photo went viral around the world on January 6, when he stormed the Capitol with his horns into the Capitol with a group of supporters of former President Donald Trump.

Chansley, also nicknamed “Shaman Keo Anon”, the movement to which he belongs and believes in conspiracy theories, was arrested days after the storming of the Capitol and charged with up to 20 years in prison.

In early September, the defendant pleaded guilty in federal court in Washington to two counts of unlawful trespassing and violent conduct.

His defense attorney cited his client’s feeling of “sincere remorse”, his suffering from psychological problems, and his spending 317 days in detention to ask the court for “clemency” for his client and a “much lighter” sentence.

On January 6, an angry crowd of supporters of outgoing Republican President Donald Trump stormed the Capitol to prevent Congress from certifying the victory of his Democratic opponent in the presidential election.

Chansley, in his thirties, from Phoenix, Arizona, participated in the attack, armed with a spear on which the US flag was wrapped, which he also painted on his face, while leaving his chest bare except for the tattoos covering him and wearing a fur hat, with two buffalo horns emerging from it.

Khobar-France: A policeman was injured in an armed attack in Cannes

The national team performs its last training session in Luanda, in preparation for tomorrow’s match against Angola

The national team performs its last training session in Luanda, in preparation for tomorrow's match against Angola