Annual inflation data in Egypt last October show the extent to which food and drink prices were affected by the global food price crisis.

Food and drink prices in Egypt continued to rise in October, jumping by 13.7% compared to the same month last year, marking an increase for the sixth consecutive month, according to data from the Central Agency for Public Mobilization and Statistics today, Wednesday.

Food and drink prices rose during the month of October by 1.3 percent compared to last September.

The following infographic shows the evolution of the rise in food and drink prices in Egypt from October 2020 to October 2021. 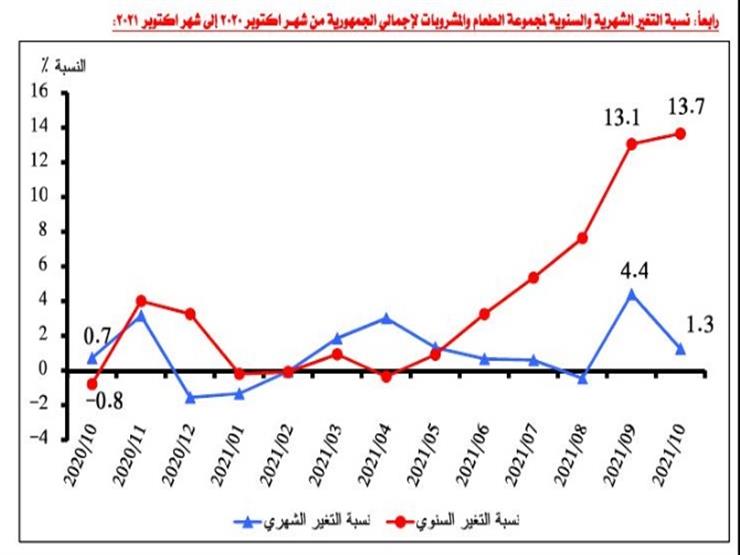 The rise in food and drink prices was reflected in the monthly and annual inflation rate in October.

The monthly inflation rate rose by 1.7 percent for the whole of the republic during last October, compared to a rise of 1.6 percent in September, which is the highest rate of increase since October 2020.

The annual inflation rate for the whole of the Republic declined during the month of October compared to September, for the first time after consecutive increases over 5 months, to record in October 7.3% compared to 8% last September.

The decline does not mean that prices are falling, but rather that commodity prices are rising, but at a slower pace than the previous month.

The following chart shows the evolution of the monthly and annual inflation rate during a year. Part of the rise in food and drink prices in Egypt is a reflection of the increase in global food prices, says Omnia El-Hammy, a senior financial analyst in the consumer sector.

She told Masrawy that commodity prices have risen sharply globally during the last period, including food prices.

A few days ago, the Food and Agriculture Organization (FAO) food price index recorded a rise of 31.3% last October compared to the same month last year, reaching its highest level since July 2011.

The increase in the index was driven by the rise in international prices of vegetable oils and grains.

Umniah Al-Hamami said that the price of palm oil, which is used in most food industries, reached its highest level in 15 years, which prompted some Egyptian companies to raise their prices.

Annual inflation data for the month of October indicate that the prices of oils and fats increased by 18.6%, as well as the prices of dairy, cheese and eggs by 11.1%, meat and poultry by 18.9% and vegetables by 22.8%, compared to the same month last year.

According to Omnia Al-Hamami: “We expected that inflation would rise in the coming months, given that more than one company raised the prices of its products to meet the global increase in raw materials, and also because the government also raised the prices of supply oils and formed a committee to re-price some food commodities.”

At the end of last month, Ali Al-Moselhi, Minister of Supply and Interior Administration, announced that the price of a bottle of oil would be raised to 25 pounds instead of 21 pounds on support cards, as of November 1.

This is the second increase in the price of supply oil this year, as the government had previously raised the price of a liter bottle from 17 pounds to 21 pounds, last June.

Umniah clarified that all these factors will affect inflation later on, given that food and drink have a large relative weight in inflation measurements.

Food and school prices raise monthly inflation by 1.7% in October

The annual inflation rate fell to 7.3% in October for the first time in 5 months

Taskin is not playing in the Sri Lankan Premier League

Taskin is not playing in the Sri Lankan Premier League