Al-Kazemi in his first comment after his survival: Cowardly missiles do not build homelands 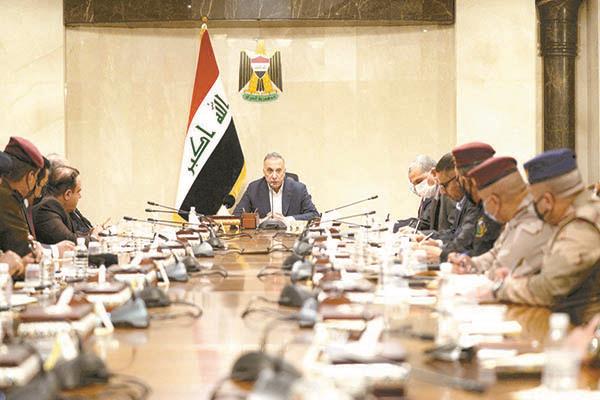 Capitals – news agencies:
Iraqi Prime Minister Mustafa Al-Kazemi survived an assassination attempt by booby-trapped drones that targeted him at dawn yesterday at his residence in Baghdad, in an attack that no party immediately claimed.

In his first reaction, Al-Kazemi called for calm and restraint, while the Iraqi News Agency reported that the security forces had found unexploded projectiles on the roof of the Prime Minister’s house.

Meanwhile, the Ministerial Council for National Security formed a higher committee to investigate the attack, which drew widespread international and domestic condemnation.

The Joint Operations Command confirmed that the Prime Minister was not hurt and that he is in good health. Security sources told AFP that the assassination attempt “was carried out by three drones, two of which were shot down by the Prime Minister’s security forces,” while the third exploded and caused damage. at his home

The sources stated that “the three planes took off from the direction of the Tigris River near Al-Jumhuriya Bridge,” opposite the fortified Green Zone, where Al-Kazemi’s house, government offices and Western embassies, including the American embassy, ​​are located.

A security source told AFP that the US C-RAM batteries “did not activate,” explaining that “the reason is the distance between the house and the US embassy, ​​as the system is designed to work to protect the US embassy and the buildings surrounding it.”

This contradicts the statements of an Iraqi security source to (Russia Today) website, that the American “C-RAM” system shot down two planes.

Two weeks ago, the vicinity of the Green Zone witnessed demonstrations and sit-ins by pro-Iranian factions rejecting the results of the parliamentary elections. These demonstrations developed into confrontations with the security forces, killing at least one person and wounding about 125.

And in his first appearance in a video clip after surviving the assassination attempt, Al-Kazemi said: “The rockets and cowardly marches do not build homelands and do not build a future.”

Al-Kazemi reassured the Iraqis of his health, indicating that he and those who work with him are fine after his house was subjected to cowardly aggression.

Al-Kazemi praised the security and military forces that are working to stabilize and protect Iraq, adding, “We are working to build our homeland through respect for the state.” Al-Kazemi also wrote in a tweet on Twitter, “I am fine, praise be to God, among my people, and I call for calm and restraint from everyone, for the sake of Iraq.” He added, “The missiles of treachery will not discourage the believers, and no hair will be shaken in their steadfastness and determination.” Our heroic security forces are dedicated to preserving people’s security, upholding the truth, and setting the law in place.

For his part, Iraqi President Barham Salih strongly condemned the “terrorist” attack, stressing his rejection of the coup against the constitutional system in the country.

He described it as a heinous crime and a dangerous transgression that requires unity, and requires confronting those stalking the security of the homeland. Ahmed Aboul Gheit, Secretary-General of the League of Arab States, made a phone call to the Iraqi Prime Minister, Mustafa Al-Kazemi, congratulating him on the safety of surviving the heinous assassination attempt that targeted His life in the early hours of yesterday morning.

An official source stated that Aboul Gheit expressed to Al-Kazemi his appreciation for his great role in leading Iraq at a defining stage in its modern history, and for his great courage in facing difficult challenges, by confronting brute forces that resort to the most inhuman and degrading methods.

Aboul Gheit stressed that assassination is the means of cowards, and that the perpetrators of this incident wish to drag the country into the furnace of sedition.

Coronavirus: Why the third dose of vaccine is necessary – BioNTech chief gives answers

Foods that increase the male hormone and promote prostate health

Foods that increase the male hormone and promote prostate health