One of the most distinctive features of a videogame is that it has to handle more than one character at a time. This is an idea that, depending on its implementation, can be an unpleasant experience, especially for the player. But before we talk more about that, let’s first look at what exactly happens in Greak: Memories of Azur, as its core is the simultaneous control of three characters.

The story takes place in faraway Azur, where a war has been raging for years between the Courines and the enemy invaders Urlags. So at some point, the Courines start and leave their place, in their attempt to be saved. Somewhere here appears Greak, a Courine, who tries to locate his two older brothers and at the same time help the rest of his tribe build an aircraft so that they can escape the Azur. The plot of Greak is not complicated, nor deeper than it needs to be. This can be seen from the well-written dialogues with the various AI characters and the beautiful animated cutscenes that enhance the overall fairytale atmosphere.

Greak is a 2D action platformer with metroidvania and RPG elements, inspired by titles such as Castlevania 3: Dracula’s Curse, Hollow Knight and Zelda .. In the game you start from your base, where you rest between your attacks on the various tracks. There you can also talk to different characters, sell and buy items and undertake side-quests (eg find three items or kill five enemies). In the beginning you only have Greak at your disposal. Shortly afterwards, you find his sister, Adara, and much later, the third member of the family, Raydel. Each of them has their own unique abilities: Greak can attack with his sword, make a double jump, swim and roll to avoid enemy attacks. Adara fights with magic, so she attacks from a distance, can swim longer than Greak and can hover in the air for a while. Finally, Raydel, has a double jump, fights with a sword, has a hook with which he can reach places that the other two do not reach, but can not swim. 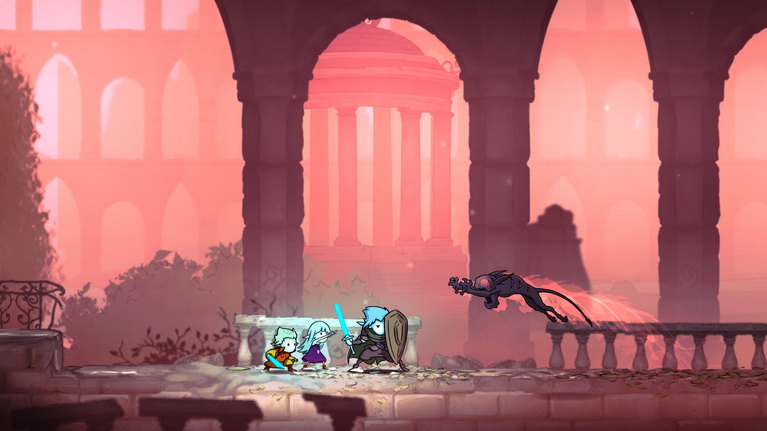 All good and all nice so far. The interesting point but also the big problem, is that you have to handle them at the same time. But the rest do not follow you automatically and you have to move at the same time or change the character of your choice to move with it. You can switch between them at any time and this – unfortunately or fortunately – is something you have to do very often. For example, if you need to get to a point where you need to climb and make precision jumps, you can try to do it with all the characters at once, but you will be educated, since for a start you must have them as close to you as possible. Even then you face difficulties, since not all of them have a double jump. So, you have to choose the safe method and do the same way, once for each character. Even in battle, when all of them automatically attack the enemies, you have to move them. But if one of them dies, even when you do not control it, then it is game over.

This engineering is the most basic part of the gameplay. I understand that the developers wanted to pass the sense of synergy between the three brothers, especially in terms of some puzzles that you find in your way, but I think it ends up becoming quite demanding, even when you get used to it. Personally, he tired me quite quickly and from some point on, he had a feeling of chores. I would prefer the option to auto-follow the other characters or at least, one way to avoid all this unnecessarily complicated, repetitive come-and-go. At least the battles, apart from the simultaneous handling of three characters – are quite simple. Attack (either with your gun or with the bow you have), avoid hits and so on. The difficulty of the enemies is not great and usually you just have to learn how they move and respond accordingly.

As you explore the various tracks, you will find ingredients that you can cook either at the base or in specific areas of the track to create foods that give you back most of your health (which you can expand if you find the corresponding health shrines). . But even here, things are not so simple, since your inventory is very limited and you can initially carry up to three items in each character. Later, you can add a few extra slots by buying the appropriate extension, but most of the time you have to carefully manage the food, important items and supplies you collect, between the characters. Inside each track, in addition to the various save points, there are also warp points, with which you can travel fast between different areas. Surprisingly, for every fast trip, you have to pay 10 crystals (game coins), which you earn from dead enemies, from various items that you break, or by selling something back at the base. At the same time, there is a basic map of the areas, but unfortunately, there is no more detailed map of each one where you are, something that may make you get lost more easily and educate you in finding some secrets. 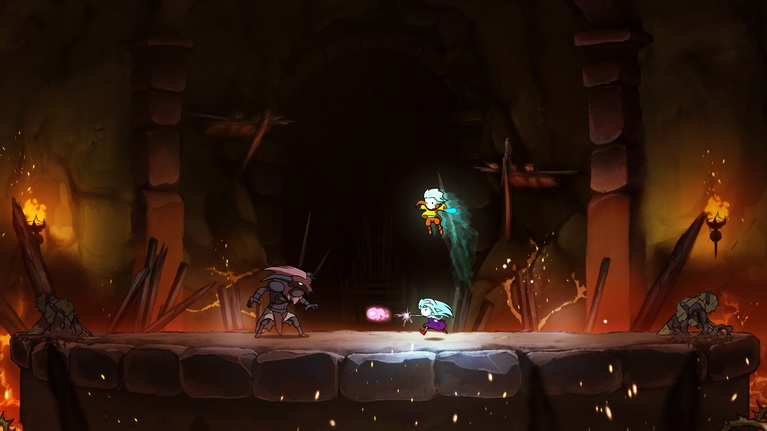 Visually, the game is quite reminiscent of Hollow Knight visuals, as it is 2D graphics with very beautiful colors, backgrounds and animations, all hand-painted. You visit dark swamps, mysterious forests, dark dungeons, ruined castles, abandoned temples and other areas. Each area has its own atmosphere and as I mentioned above it brings out something from a fairy tale. The music moves in the same style, with the orchestral soundtrack including a variety of compositions, from calm and ethereal melodies, to more “heavy” pieces that accompany the battles or other intense moments. It is not an unforgettable musical investment, but it is definitely compatible with the above.

Greak: Memories of Azur is fun and well made, especially in the field of visual presentation. But it could be much better, as it limits itself to some points, especially in the three-character control system, making the whole experience more tedious than it should be. You will like it if you prefer a more methodical, “strategic” approach to action platforming / metroidvania. But if you are used to more traditional gameplay mechanisms, you should probably look for … another castle.