finished Egyptian Engineers Union The Egyptian Chess Cup “Men – Women” for the 2021 season, in the presence of Engineer Ahmed Hashish, Assistant Treasurer and Media Spokesperson for the Syndicate of Engineers, Engineer Moamen Shafiq, member of the Supreme Council of the Syndicate and Executive Director of the Chess Club and General Supervisor of the tournament, Dr. Hisham Mohamed El Gendy, President of the Egyptian Chess Federation, and Major General Youssef Wesal, Vice President of the Federation, and Brigadier Wajdi Lamei, head of the Competitions Committee of the Federation.
In his speech, Engineer Moamen Shafeeq expressed his happiness for holding the tournament for the third year in a row at the union headquarters, noting that the union council headed by Engineer Hani Dahi, captain of engineers, was keen to present two cups to the best player and player nominated by the union through their participation in the championship in the name of the late engineer “Mahmoud Maghawry” Secretary The previous year of the union, in appreciation of his career and in honor of his fragrant memory
Shafik also praised the good organization of the tournament and the intense competition among the participants, which made the Federation’s Competitions Committee share the first “men” place between the Misr Insurance and Sharqia for Tobacco teams, due to the repetition of the tie-breaker more than once.
Shafik praised the tangible progress of the Syndicate team, despite its modernity, as it was formed in 2019, and the team participated in the Egypt Cup from then until 2021.
Pointing out that despite not winning the cup this year, the Syndicate team scored more points than last year and advanced to second place in its group.
The Syndicate team consists of 14 players, the coach of the team is Engineer Ahmed Sherif Saad, and its CEO is Engineer Moamen Shafiq.
For his part, Dr. Hisham El-Gendy, President of the Federation, extended his personal thanks and the members of the Board of Directors of the Egyptian Chess Federation to the Syndicate of Engineers and members of the Syndicate for their cooperation in holding the tournament, which was held in an honorable organizational climate, hoping for the continuation of cooperation between the Syndicate and the Federation.
The president of the federation also thanked all the participating teams, led by the winning teams, as well as the arbitration teams led by the international referee, Brigadier General Saeed Hassanein, head of the main referees committee of the federation.
The finals resulted in the men’s teams (Misr Insurance and Sharkia Tobacco) winning the first place and the championship cup equally for each team and certificates of appreciation. in second place
The Cairo Academy team came third.
In turn, Engineer Ahmed Hashish and Engineer Moamen Shafiq presented two cups to the best player in the name of the late Engineer Mahmoud Maghawry to player Bassem Samir and player Shahanda Wafa, taking memorial photos and handing over certificates of appreciation and medals to the winning teams.
It is worth noting that the championship activities took place at the headquarters of the General Syndicate of Engineers for the third year in a row, from September 1 to September 6, 2021, with the participation of 150 male and female players.
Counselor Farag Hammouda, member of the Board of Directors of the Egyptian Chess Federation, and the international referee, Brigadier Said Hassanein, head of the main referees committee of the Federation, Eng. 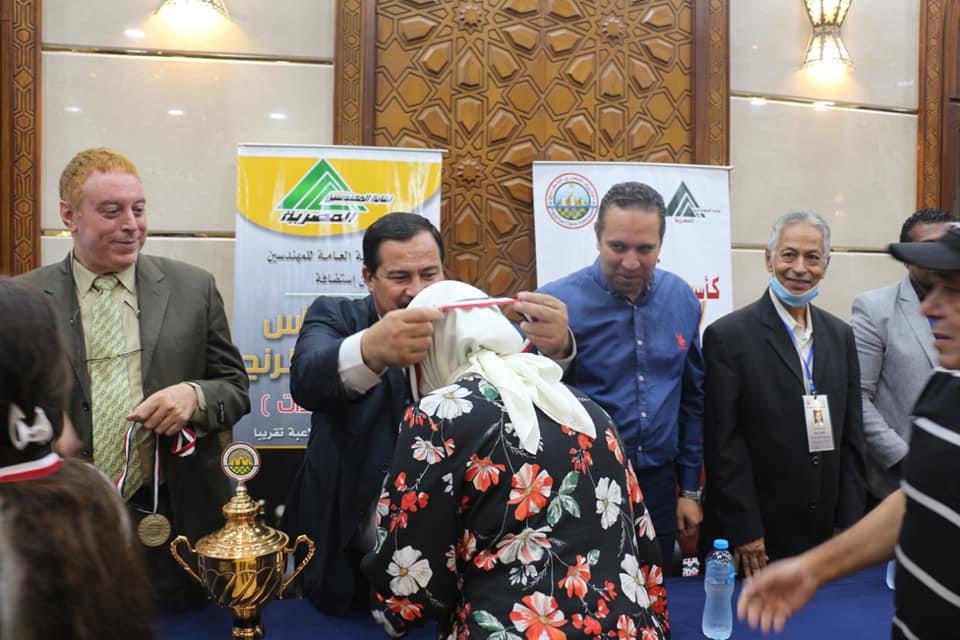 In the video .. Mozambique loses with the participation of Al-Ahly player Mikisoni