The arms trade is booming in Kandahar, the stronghold of the Taliban 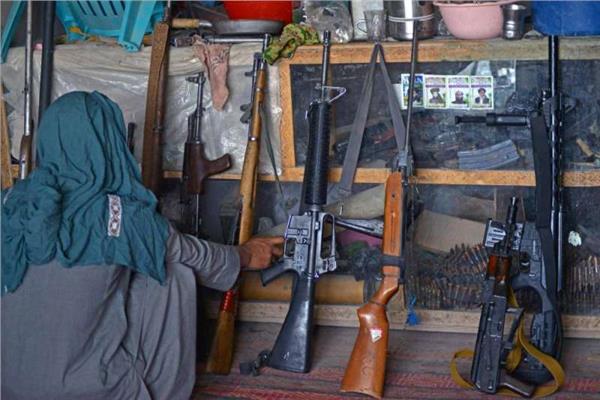 The Taliban’s takeover has plunged Afghanistan into uncertainty and economic decline, but arms dealer Khan Muhammad is making the most of it.

Located between a pharmacy and a food store in Panjwayi in southern Kandahar province, the birthplace of the Taliban, Mohammad’s shop is stocked with fresh stock.

Camouflaged combat vests and ammunition belts hang from the walls as Al-Mohammed displays his wares, including American-made Smith & Wesson pistols.

More pistols, grenades, walkie-talkies, and canisters full of lead were laid out on the shop window.

Khan Mohammed explains that the end of the conflict made many gun owners think they no longer need them.

“People who have had guns in their homes for years bring them to us,” he says.

“We buy and sell … to the mujahideen,” he added, referring to the Taliban, explaining that the movement “does not allow anyone else to carry weapons.”

Muhammad’s activity is not limited to selling weapons, but also trading in their accessories. Hanging from the ceiling are white Taliban baseball caps bearing the two certificates, and flags of the movement are for sale.

A larger arsenal is for sale at another store in Panjwai Market, adorned with Taliban flags and portraits of their top commanders.

The exhibit includes assault rifles, including various types of Kalashnikovs, as well as American-made M4 and M16 rifles, in addition to light automatic rifles.

For years, the Taliban have purchased weapons and ammunition on the black market, as well as looted weapons and equipment from the battlefield and from military sites vacated by the army, according to the United Nations and Western observers.

In addition, the recent collapse of the Afghan army left an arsenal of weapons for the movement.
Billions of dollars in weapons

In addition to a large amount of US-made infantry weapons, Afghanistan’s new rulers now have equipment and vehicles, including Humvees, armored personnel carriers, and at least one usable Black Hawk helicopter.

The militants are also making the most of their other spoils, selling a variety of items they got from abandoned Afghan and Western bases.

The Taliban took control of Panjwai district in July as the pace of the withdrawal of US-led forces from Afghanistan accelerated.

In the local market, the supply varied from building materials to metal trays that she acquired from the Afghan military base in the area.

“We bought all these things from the Taliban after they occupied the Afghan army base,” says the seller, Murtada, who only gave his first name. “Now we are offering them for sale in the market.”

The US President’s National Security Adviser Jake Sullivan said earlier from the White House, “We don’t have a clear idea of ​​where every piece of equipment is, but it is certain that a large number of it fell into the hands of the Taliban… We don’t have the impression that they intend to return it to us.”

The fall of Western weapons into the hands of the extremist movement sparked internal criticism in the United States for the administration of President Joe Biden.

Afghanistan: Taliban will be judged by actions, not promises, says EU

Salah Amin .. the owner of the “global” goals, who joined the Smouha apparatus

Salah Amin .. the owner of the "global" goals, who joined the Smouha apparatus