Taliban: We will allow women’s demonstrations and protests to take place 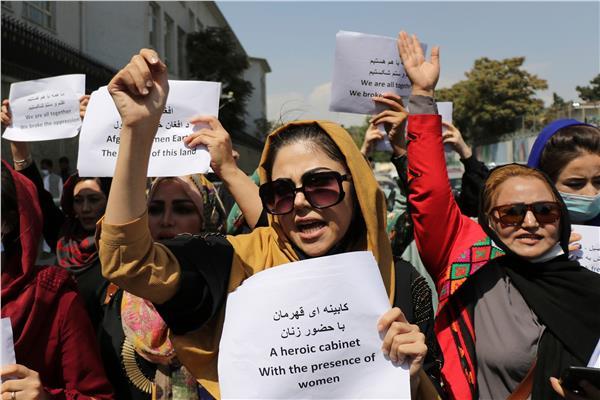 Today, Monday, September 6, Taliban spokesman Zabihullah Mujahid confirmed that the movement will allow women’s demonstrations and protests to be organized in Afghanistan, this came during a press conference held today for the movement.

This comes two days after the movement dispersed a women’s demonstration in front of the presidential palace in the Afghan capital, Kabul.

Read also: The tragedies continue .. Forcing women to marry to flee the country

Dozens of female demonstrators gathered outside the presidential palace in Kabul, according to video clips, demanding the new Taliban leadership to support women’s rights achieved under the auspices of the West and to include women in the next government.

At one of the gates, about a dozen women carried small printed papers urging a heroic government with the participation of women, according to the Associated Press.

While the demonstrators chanted slogans demanding human rights, refusing to return to the past.

In addition, the participants distributed a document stating that Afghan women should be granted full rights to education, social and political contributions to the country’s future, and to public freedoms, including freedom of expression.

This came after a senior Taliban official announced on the evening of Wednesday, September 1 that it was unlikely that the next government would include women. Sher Mohammad Abbas Stanekzai, who was a prominent hardliner in the first Taliban administration, told BBC Pashto radio that women would be able to continue working, but “may not have a place” in the future government or other high positions.

It is noteworthy that the city of Herat in Afghanistan, where yesterday, Thursday, September 2, witnessed about 50 women taking to the streets, in a rare demonstration to demand the right to work and to protest the absence of women from the government.

On Tuesday, August 31, US President Joe Biden announced an end to the war on Afghanistan, 20 years after the start of the military operation.

The US president said in a press conference that his country had no interest in staying in Afghanistan and that he would not extend the war there forever.

The US withdrawal came after the airport in the Afghan capital, Kabul, witnessed a number of successive explosions, which led to dozens of deaths and injuries.

The explosions took place near the area where civilians who want to leave the Afghan capital, Kabul, gather.

The US Department of Defense said that 13 American soldiers were killed as a result of the attack, while 15 others were wounded, while no other country announced the casualties of its soldiers.

Over the past few days, several news reports had warned that the vicinity of Kabul Airport could be a target for terrorist organizations.

A number of American sources revealed that the successive attacks that targeted the airport were the result of a suicide bombing by ISIS.

Immediately after the explosions, many comments began that held US President Joe Biden responsible for the casualties due to the disastrous withdrawal carried out by his forces over the past days.

A source in Al-Ahly to Masrawy: We did not receive an invitation to a friendly match with Simba

A source in Al-Ahly to Masrawy: We did not receive an invitation to a friendly match with Simba