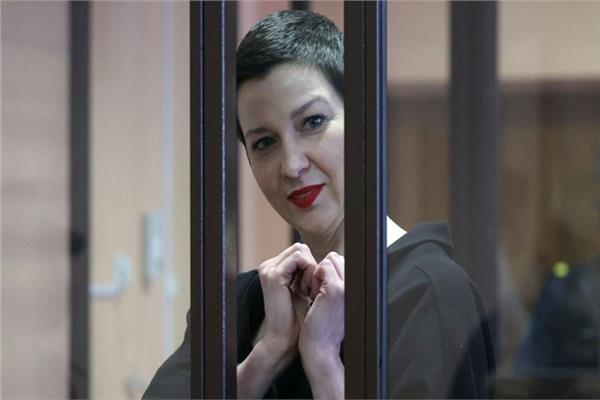 A Belarus court sentenced one of the most prominent opposition figures, Maria Kolensikova, to 11 years in prison on Monday after she led unprecedented demonstrations against President Alexander Lukashenko last year.

Her lawyer, Maxim Znak, was also sentenced to 10 years in prison, according to the media service of former presidential candidate Victor Papariko, who campaigned for Kolesnikova.

Kolesnikova is the only prominent leader of last year’s unprecedented protests still in Belarus, where she has been held for a year, after she resisted an attempt to forcibly deport her by tearing her passport off.

Germany was quick to condemn the ruling, as a spokeswoman for its foreign ministry told reporters, “The German government condemns the unjustified ruling against Maria Kolesnikova and Maxim Znak and the transformation of the judicial system into an instrument of political repression in Belarus.”

Lukashenko, who has been in power since 1994, has been carrying out a security crackdown against the opposition since protests erupted when he declared victory in a disputed election.

In a video recording from the court broadcast by Russian media, Kolesnikova, who was handcuffed inside the dock, appeared making a heart sign with her hands, something she did repeatedly during opposition rallies.

She was smiling as the dark red lipstick that she is famous for was evident on her lips.

“We are pleased to see you, dear spectators,” said Zannak, who was standing next to her, in a video recording before the verdict was read.

Kolesnikova, 39, who was a flute player in the Belarusian Symphony Orchestra, has become a symbol of the country’s protest movement.

She was arrested last September, when Belarusian intelligence agents put a bag on her head, threw her in a minibus and took her to the Ukrainian border.

She resisted an attempt to expel her from the country by jumping out of the car, according to media reports.

Kolesnikova was among a trio of women, along with opposition leader Svetlana Tikhanovskaya and Veronika Tsypkalo, who led last summer’s rallies against the Belarusian president.

Tsypkalo and Tikhanovskaya, who ran for president in place of her imprisoned husband, fled Belarus.

Tikhanovskaya, who now resides in Lithuania, described both Kolesnikova and her lawyer as “heroes” after the verdict.

“The system wants us to see them broken and exhausted. But look: they’re smiling and dancing,” she said on Twitter.

Together, the three women inspired a wave of women’s demonstrations.

Znak, 40, worked alongside Kolesnikova for Babariko, one of Lukashenko’s strongest opponents, who was sentenced in July to 14 years in prison on fraud charges.

Western countries imposed sanctions on Lukashenko’s regime over the way it dealt with opposition activists at home and abroad.

The President of Belarus was subjected to a wave of international condemnation in May when a passenger plane was forced to divert and land in Minsk, to the arrest of a dissident who was on board.

Belarus was in the international spotlight again in August after an athlete said her team tried to force her to leave the Tokyo Olympics and Poland granted her a humanitarian visa. Warsaw also granted a humanitarian visa to a second Belarusian athlete who said it was “dangerous” for her to remain in her country, the Polish news agency reported Monday.

An exiled opposition activist was found hanged in a park in Ukraine.

But with the momentum of the protests waning and the authorities seeking to eliminate the remaining pockets of opposition, there were no indications that Lukashenko was ready to step down while he still had the support of his most important ally, Russia.

Reports for multiple technical problems in the version of Sonic Colors Ultimate for Nintendo Switch – Fourals.com

Including fish.. 5 foods it is better to stay away from during the change of seasons

Including fish.. 5 foods it is better to stay away from during the change of seasons